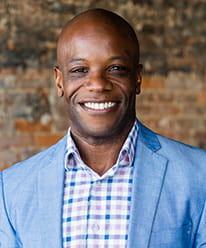 Tendai serves as the Chief Strategy Officer for Saling Wealth Advisors, where he focuses on supporting and providing strategic guidance to businesses and families. Tendai adds a wealth of business experience and insight to support our clients with over 15 years operating and leading businesses ranging from fast-growing technology companies that have raised Venture Capital to small businesses and global corporations. In 2018, Tendai was recognized as The Small Business Leader of the Year by Greater Louisville Inc. (GLI), Louisville's metro chamber of commerce.

Some of Tendai's past professional experience includes his time as the Executive Director of GLI's EnterpriseCorp, where he strategically advised hundreds of entrepreneurs and businesses at various stages to further their growth and development. During that time he also managed the Louisville Enterprise Angels – one of Kentucky's largest angel investing groups at the time. Prior to that, Tendai was the first person hired to help grow and lead Summit Energy's (now Schneider Electric) Sustainability Services Division.

Tendai has served in leadership roles within and on the boards of organizations such as Venture Connectors of Louisville, the Community Foundation of Louisville's Vogt Invention and Innovation Awards, the Louisville Sports Commission, the Fund for the Arts, and currently the University of Louisville College of Business Board of Advisors.

Tendai attended the University of Louisville where he earned a Bachelor of Science in Chemical Engineering from the J.B. Speed Scientific School, while playing Varsity Football for the Cardinals. He then earned a Master of Business Administration with a concentration in Entrepreneurship from the University of Louisville College of Business. Tendai is a graduate of St. Xavier High School in Louisville, Kentucky, where is a 2007 St. Xavier Hall of Honors Inductee.

Outside of his business and professional commitments, Tendai enjoys spending time with his wife, Carissa, and his children, Kali, Sarudzai and Zaid. He also enjoys coaching youth sports, traveling, leading an active lifestyle, reading and fine dining.